S.U.E.T. is a card game where you play the role of one of four evil geniuses trying to gain entry into the Society of Ultimate Evil and Terror. The Society has declared that the first genius to construct their own unique doomsday device will be allowed to join. You will play cards not only to help construct and defend your doomsday device, but also to thwart the efforts of your competitors on your quest to become a member of S.U.E.T.  Maybe once your in, you can help them come up with a better name!


The Cards: There are five different type of cards you will use in SUET.

Instant Action Cards: These cards are used to help you build and protect your Doomsday device, as well as mess with your competitors. You can play as many of these cards as you want and at any time you want, unless the rules text on the card says otherwise..

Action Cards: Cards of this type work just like Instant Action cards, except you can usually only play one card a round and only on your turn.

Setback Cards: When these cards are drawn on the first draw of your turn, it means bad things happen to you. However, if you receive them in any other way, you keep them in your Hand and can play them on your opponents.

Component Cards: These are the parts that make up your doomsday device.  Each device is made up of four Components, a Red, a Blue, a Green and a Purple one. Each evil genius has a set of Components that only they can use, plus there are 2 sets of Universal Components that anyone can use. Components can be “broken” (and repaired) through game play and if this happens turn the card upside down so that the word Broken is on top
How to Win: The first player to play one of each color of Component Cards into their Lab (see below) that are unbroken wins the game.


Anatomy of the Cards: This is a brief look at the parts of the cards. 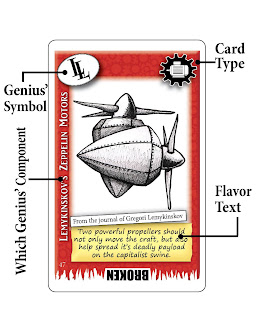 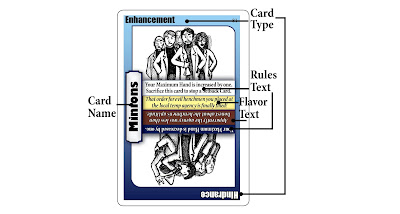 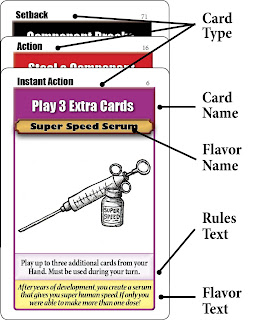 Card Name: Name by which the card is referenced.

Rules Text: This is a brief summation of the rules associated with the card.

Which Genius’ Component: This will indicate who can use the Component. Universals can be used by all.

Genius’ Symbol: This is another way of quickly identifying which Evil Genius the Component belongs to.

The Play Area: As you play there are four different areas
that you will need to set-up/maintain. 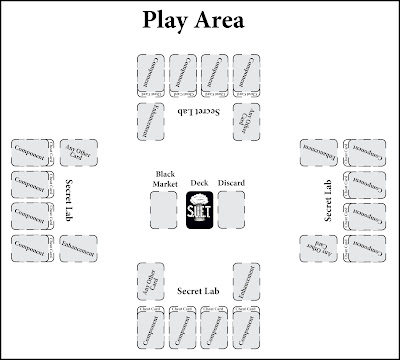 The Deck: Set this up in the middle of the table where everyone can reach it. When/If the Deck runs out, shuffle the Discard pile and make this the new Deck.

Discard Pile: This should also be set in the center of the table near the Deck. Players may look at the Discard pile at any time, but may not change the order of the cards.

The Black Market: This should also be set up in the middle of the table near the Discard pile. Players may look through the Black Market any time they want as long as they make sure that all the cards remain in the same order.

Lab: This is the area immediately in front of the players where they will place their doomsday device’s Component Cards, Enhancement Cards or any other card that you are told to place in your Lab.

S.U.E.T. has two ways to play. The first is a quick, less complex game that allows you to play many hands in a session. The second way adds a new mechanic that will make for a more challenging game and longer game.


How to Play the Quick Game:

1. Pick an Evil Genius: You can either have everyone pick who they want to be or randomly select a genius. Take your Evil Genius Card and place it in your Lab.

2. Determine who goes first: The player with the best maniacal laugh goes first.

4. Deal out four cards: Shuffle the Deck and deal four cards to each player. Remember, if you are dealt a Setback Card, it goes into your hand and you can play it on other players on your turn.

5. Set up the table: At this point, just set the Deck in the center of the table. Leave room for other game areas as indicated in the diagram above.

6. Each player takes their turn:

I. Draw: The player draws a card from the Deck. If the card drawn is a Setback Card,
do what the card says to do and proceed to step III. If it isn’t place it in your Hand.

II. Play: The player must do one of the following actions on their turn.

a. Pass - If you have 3 or less cards in your Hand, then you can simply end your turn.

b. Discard a Card - Choose a card from your Hand and place it in the Discard Pile. If you
decide to discard a Component Card, it will go into the Black Market, not the Discard
Pile. (Unless another Card specifically says otherwise)

d. Build a Component - Placing a Component from your Hand into your Lab is considered
a Build.

IV. End Turn - Play proceeds clockwise to the next player.

Cards that can be tricky:

All of the cards have a short description of their rules in the Rule Text section of the card. Space was a bit tight so here are some additional explanations for a few cards.

Enhancement/Hindrance Cards:
People have asked when the cards effect begins. The answer is immediately when placed in your or your opponent’s Secret Lab. So if you get a free Build or Repair you can use them immediately. If a Hindrance is played that reduces your Hand Limit, you must immediately discard down.
If you have another Enhancement Card in your Hand and you want to replace one that is in your Secret Lab, no matter which side is up, simply place the unwanted card in the Discard Pile and place the new one in its place. This counts as an action and is one of the ways to get rid of a Hindrance.
Just as a reminder, when the Hindrance side is up you cannot use it to block a Setback Card.

Cash Flow Hindrance:
If you have this Hindrance and play the Repair All of Your Components Card, you only have to discard one card. If you have no cards to discard, then you cannot play the repair card.

Cheat Cards:
If someone has used a Cheat Card with an opponent’s Component it will not travel with the Component if it moves later in the game. If a card has you steal, discard or move a Component in any way, the Cheat card is placed in the Discard Pile.

Cheat cards are used only on cards that belong to you. (Either in your Hand or just acquired from an opponent through card play.)