Evil Genius Cards
There are four evil genius cards that you can use to keep near your Secret Lab to remind yourself who you are playing. You can also use these cards to randomly determine the Evil Genius you want to play. (If you can think of another use for the cards, go for it. Have fun and let us know! We'd love to hear about it.) 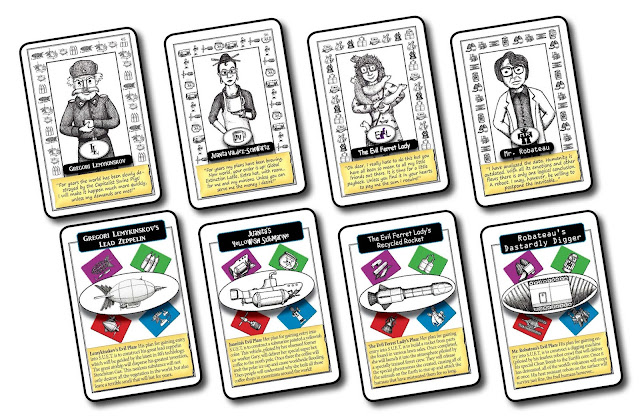 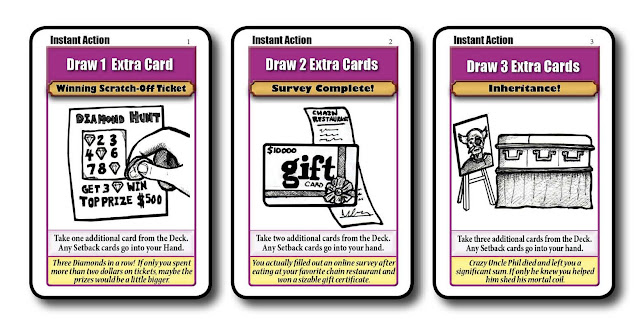 Draw 1 Extra Card - Draw one extra card from the Deck. If this extra Draw is a Setback Card, it goes into your hand and doesn’t affect you.

Draw 2 Extra Cards - Draw two extra cards from the Deck. If this extra Draw is a Setback Card, it goes into your hand and doesn’t affect you.

Draw 3 Extra Cards - Draw three extra cards from the Deck. If this extra Draw is a Setback Card, it goes into your hand and doesn’t affect you. 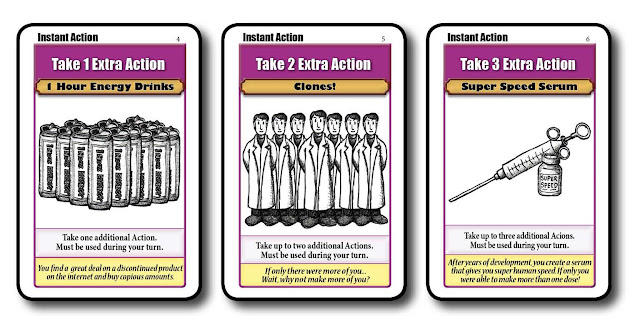 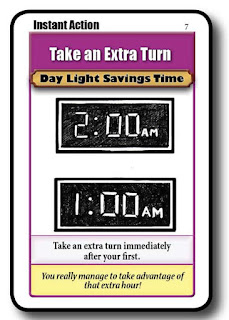 Take an Extra Turn - As soon as you finish your turn, you take another. If you are playing the Long Game the Color Round will stay the same for both of your turns, even if you are the first player. (The person who generates the Color Round)

Cheat Card (3) - You play this Card with another player’s Component to use it as your own. Place it behind the Component in your Lab. If the Component that it is with is moved in any way (Discarded, Stolen or Sent to your Hand) the Cheat Card is discarded. 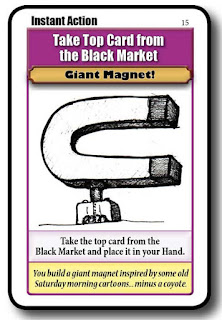 Action Cards:
These cards are not only used to help you in your efforts to build your doomsday device, but also to make things harder for your opponents. Each Action card you use is considered one action so unless you are able to increase the number of actions you get, you can only play one on your turn.

Here is a list of the individual cards and a brief description of what they do.

Steal a Component (3)-  Take a Component from another player’s Lab and place the card in your Lab. If you can not use it than send it to the Black Market. Cheat Cards will be discarded.

Break a Component (3) - Break an opponent's Component. Flip the card so that the Break side is facing up. 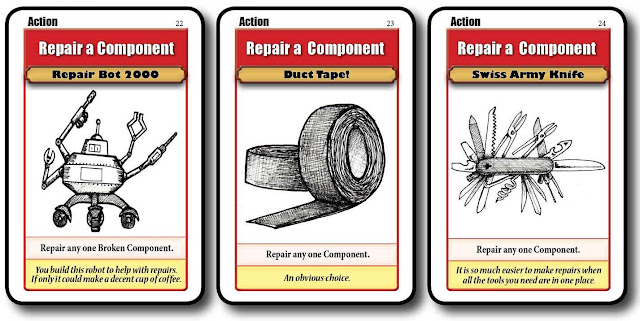 Repair a Component (6) - Repair one of your Broken Components. Flip the card back to it’s original position. In the Long Game, the Color Round does not matter playing this card. 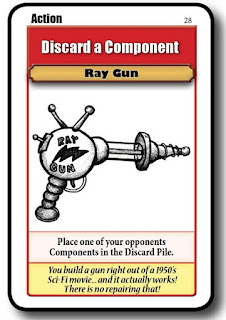 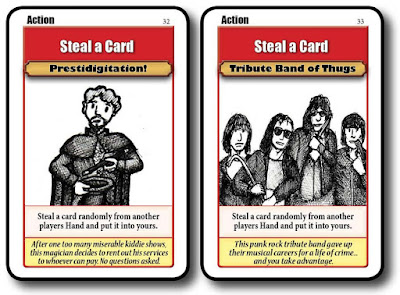 Steal a Card (2) - Take a card at random from another player’s Hand. If you play this with certain Instant Action cards (ie. Look at Opponent’s Hand), then the selection is not done randomly. The player who played the card can pick whatever card they choose. 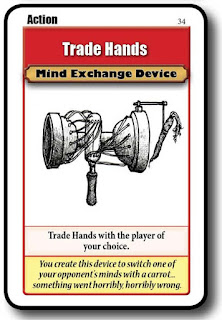 Trade Hands - Switch your hands with an opponent’s. 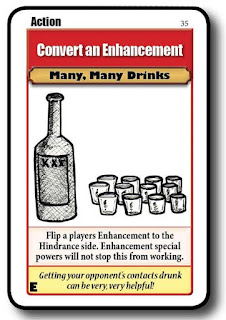 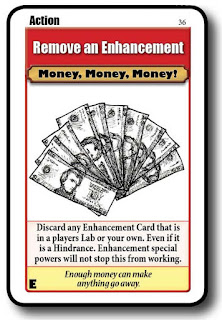 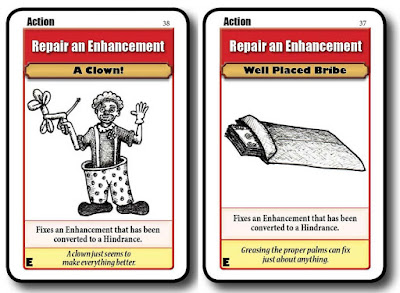 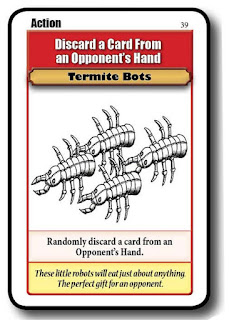 Discard a card from an opponent’s hand - Randomly discard a card from someones hand. If you play this with certain Instant Action cards (ie. Look at Opponent’s Hand), then the selection is not done randomly. The player who played the card can pick whatever card they choose. 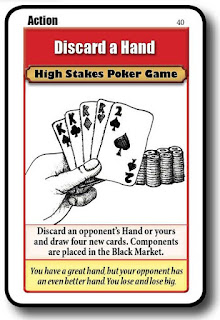 Discard a Hand - Place an opponent’s entire Hand, or your own into the Discard Pile unless they are Components. They will go to the Black Market. Whoever discarded may now draw four new cards. Your turn ends when you redraw your hand unless you draw an Instant Action Card that allows you to continue. 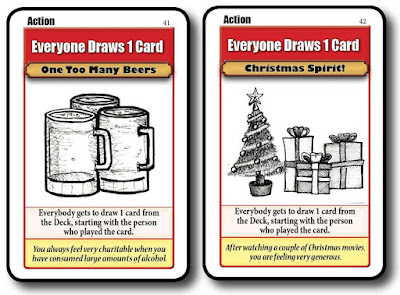 Everyone Draws one card (2) - Everyone draws one extra card. 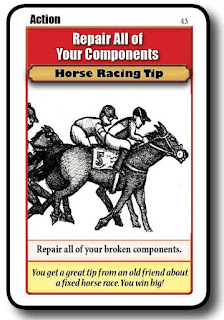 Repair all of your Components - Flip any of your cards that are Broken back to their upright position. 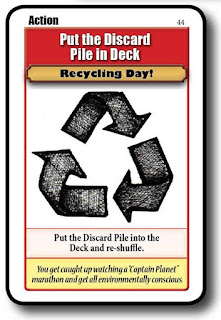 Put Discard Pile in Deck - Take the Discard Pile, put it in the Deck and Shuffle. Replace the Deck in the center of the table. 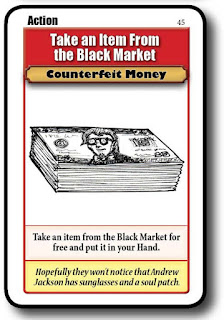 Everyone Discards one card - Everyone picks one card and discards it.

Component Cards
Component Cards are the individual pieces that make up the doomsday devices the players are trying to build. Each evil genius has four components that are directly associated with their particular device and will have their names on them. (ie. Lemykinskov’s Zeppelin Motors, The Ferret Lady’s Ferret Crew, etc.) You cannot use another player’s named Components.(Unless you play a card (like a Cheat Card) that allows you to). There are also two sets of universal components that can be used by anyone, all of which have Universal in their title. (ie. Universal Super Bike Engine, Universal Mysterium X, etc.)

Each set of Components are made up of four colors (Red, Blue, Purple and Green) and it will take one Component of each color to complete a doomsday device and win the game.

Red is associated with propulsion or movement. It is a devices motor or engine, the thing that makes it move.
Blue is the devices steering or guidance system. It’s what controls where the mechanism goes.
Purple is the body or chassis of the device. It’s what houses all of the other components.
Green is the thing that goes boom. The thing that triggers the doomsday event, or facilitates it happening.

Playing a Component card is considered a single action and is placed in the player’s Secret Lab. If a player ever has to discard a Component it is placed into the Black market, not the Discard pile, unless a card says specifically to place it in the Discard Pile.

Components in a player’s lab may be damaged and repaired through card play. When a component is damaged it is turned so that the Broken text is on top. You cannot win if you have a Broken Component, so you must repair it first. There are numerous cards and abilities that will allow you to fix a Component. You can repair a component on any Color round if you are playing the long game.

Enhancement Cards
Enhancement Cards are unique cards that give a continuous benefit (or hindrance, see below) when in your lab. When played they count as an action and are placed in your Secret Lab. You may only have one Enhancement in your Lab at any time and the benefit provided by the card becomes immediately available when played. If you draw another Enhancement card that you think would work better for you, you can replace it. Play the new Enhancement in your Lab as an action and the unwanted one in the discard pile. You can play an Enhancement on another player if you wish, but only if they do not already have one in play.

You can sacrifice an Enhancement (as long as it is not a Hindrance) to block the effects of any Setback Card. Whether it is your first draw or it is played on you by an opponent, simply DIscard the Enhancement and either continue your turn or whoever played it on you continues their turn.

During play, there are several cards that will convert your Enhancement to a Hindrance. When this happens, turn the Enhancement card around so the Hindrance side is showing. You cannot sacrifice the card to block a Setback Card to get rid of it, though you can replace it with another Enhancement.

You can also play a Hindrance on an opponent that does not already have an Enhancement Card in their Secret Lab. As always, it costs an action to plat the card. The effect will begin the moment it is played. ie.If your hand limit is reduced you must discard extra cards immediately. 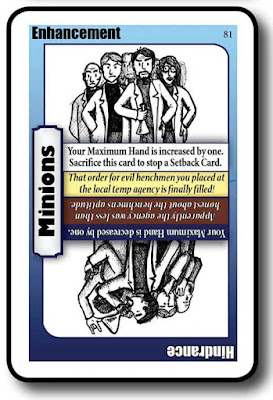 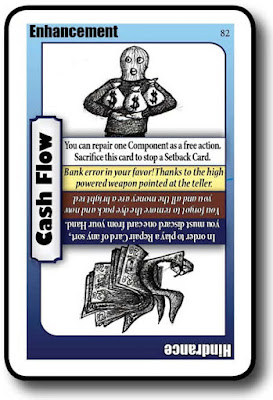 Cash Flow - Enhancement: As long as this card is in your Lab you can repair one Component as a free action. Hindrance: In order to play a Repair Card of any sort, you must discard one card from your Hand. Only one card needs to be discarded per repair card, no matter how many repairs the card grants. ie. If a player plays a card that gives them 2 actions and they play two Repair Cards, then they must discard 2 extra cards. If the same player plays a Repair All Components Card to repair his two broken he only has to discard 1 extra card. If you don’t have a card to discard, you cannot repair the Broken Component. 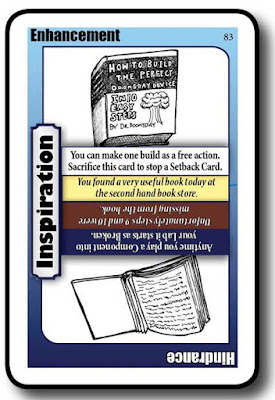 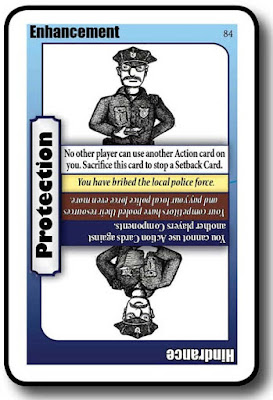 Protection - Enhancement: As long as this card is in your Lab No other player can use another
Action card against you. This only blocks Action Cards, so Setback, Instant Actions and other Enhancement Cards will still work. Hindrance: You cannot use Action Cards against other player’s Components.

Setback Cards
Setback Cards are designed to make life more difficult as players try to build their Doomsday Devices .
When Setback Cards are drawn on the first draw of your turn, then whatever the negative effect of the card immediately affects you, Once you resolve the card’s effect, your turn ends. If the Setback does not affect you in anyway, you still end your turn.

When Setback Cards are received in any other way than the initial draw, they go into the player’s Hand and can be played on other players just like other cards. Playing these cards against an opponent count as a single action and take effect immediately (or when it becomes applicable). Enhancement Cards can be discarded to prevent Setback Cards from working.

Component Breaks (3) - When you draw this card then the player to the left chooses one the Components in your Lab and turns it to the Broken side. If you play this out of your hand on another player, you get to select the Component to Break. This card cannot be stopped by a Protection Enhancement Card. If you have no Components to break, then you lose your turn. 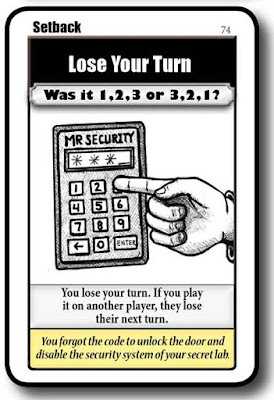 Lose Your Turn - When this card is drawn you immediately lose your turn. Discard down to your Maximum Hand and move on to the next player’s turn. If you play this on another player, they will lose their next turn. Just set the card in the affected player’s Lab and put it into effect on their next turn. 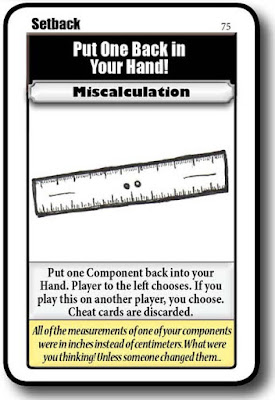 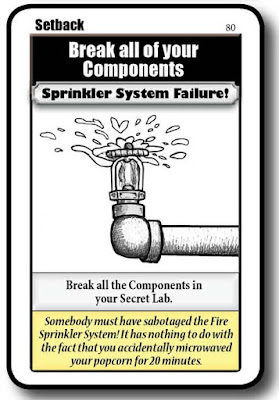 Break all of your Components - This card forces the player to break all of the Components that are in their Lab If you have no Components in your Lab, lose your turn. 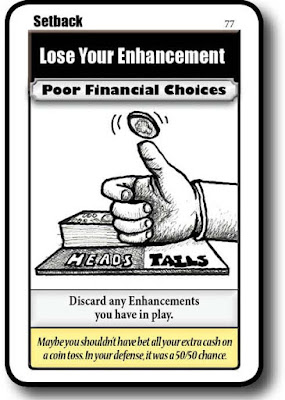 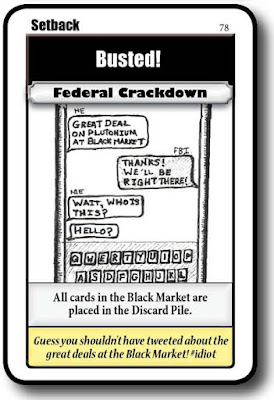 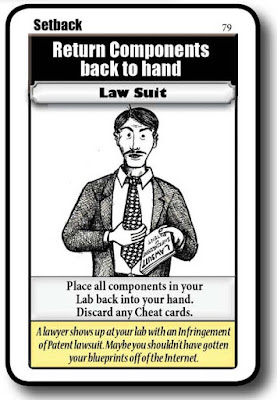 Return Components Back to Hand - Whoever receives this card has to take all of their Components from their Lab and place them in their Hand. All Cheat cards are discarded. If you have no Components in your Lab, or the person you play it on does not, then they lose their next turn.