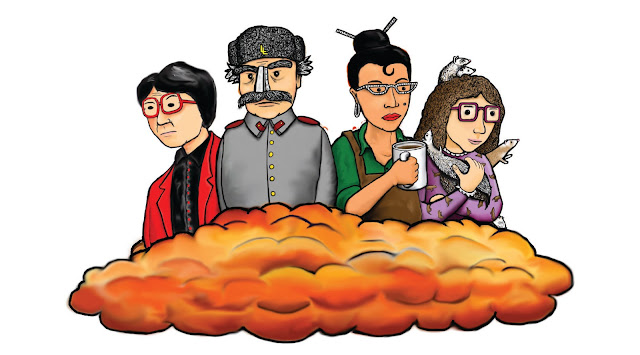 Gregori Lemykinskov was born in a small unheard of country that ends in a "stan," that was once a proud member of the former Soviet Union. Gregori loved the Soviet Union! He wept when it fell and longs for a return to it's former glory.

His parents were renowned for their Limburger Cheese empire and had amassed a great fortune when they died in a mysterious bathing and toast making accident. Being an only child, the fortune and control of the company was passed to Gregori. grew the empire but ended up selling it for a huge sum in order to pursue his dream of becoming an evil scientist.

After mastering the evil sciences, he moved to the United States and has lived there complaining daily of just about every aspect of his new home. While his inheritance has made it so he is enjoying a very comfortable lifestyle, the fact that he could have never enjoyed this sort of life in his country of origin does not seem to concern him. One of the most notable features of Lemykinskov, other than his thick eastern european accent (and equally thick eyebrows and Stalin-stache) comes from the fact that he was born with no nose. He has created a variety of noses that he can fit on his face for any occasion, but usually wears his "Iron Curtain" nose, for it's intimidating appearance. The fact that he was born with no nose might raise the question of how this evil mastermind smells, but I am sure you can come up with suitable punchline for that one.


His Doomsday Device: Lemykinskov’s has developed a powerful gas called Stenchium, that will destroy all of the world's vegetation, and cover the Earth in a stink that will last for generations. To deliver his evil weapon, he plans to construct his invincible Lead Zeppelin. Powered by a pair of great propellers and guided by some old 80s' tech (the best tech, as far as he is concerned) it will be more than adequate to not only take over the world, but assure him entrance into SUET.
.

His Secret Lab: Gregori had the main Lemykinskov Limburger Plant shipped over from the uncle land and rebuilt brick by brick.This old abandoned factory was once one of the leading producers of Limburger Cheese in the world and was the source of the Lemykinskov fortune. Now the only things that remain of the once great cheese empire are the smell and the last Lemykinskov (who also has a bit of an odor).

After graduating from college with a PHD in Renaissance Basket Weaving, Juanita found that she was ideally qualified to be a barista at an internationally famous chain of coffee shops. While she worked there, becoming as bitter as the coffee she served, she began experimenting. At first it was with just different coffee flavors, then it evolved into more sinister concoctions. Juanita was eventually fired as one of her experiments ended up leading to a lawsuit and the printing of the phrase "Contents May Be Extremely Hot" on every cup. In her defense, the extremely rude customer did ask for their coffee to be extra hot! Maybe the fact that the coffee melted the customer's lips off was a a bit too much. After being let go she swore revenge! Marrying a rich 90 year old entrepreneur (and coffee aficionado) who helped her launch her own chain of coffee stores, she was able to continue her experiments on unwitting customers.


Her Doomsday Device: She has decided to use the special super hot coffee formula that she developed to melt the polar ice cap. To deliver this deadly payload she will build a yellowish submarine that will be driven there by her first employee (and subject to many mind/emotion control experiments) Gary.

Her Secret Lab: The World’s Hottest Coffee Shop (not just a clever name) has been sued 4 times by people who have burned themselves on her coffee. None have won their cases, however, as the title of the restaurant was warning enough (also "special" coffee was served at the trials as an example of how hot it was. Strangely people became very opposed to convicting Juanita's company after that). If only the customers knew what nefarious activity was going on in the secret lab beneath them.

If there have been groups fighting for animal rights over the years the Evil Ferret Lady has been a member. She has fought and fought hard for animal rights since she was in college mastering the field of Chemistry. The Evil Ferret Lady, however, was kicked out of every group she ever joined because they felt her methods were not only unorthodox but also too excessive. She did not care about the people during her missions, only the animals. It was during a rescue mission at a cosmetic factory that she acquired a group of ferrets who became not only her faithful minions but her only friends. She is an avid sewer, knitter and crocheter and makes all her own (and animal friends) clothes. She is not one for shaving, but I think that may be more information than necessary.


Her Doomsday Device: The Evil Ferret Lady has used her extensive knowledge of Chemistry and animals to develop special pheromones that will cause all animals to rise up and attack the humans that have subjugated them for years. She plans on introducing these pheromones into the atmosphere via a rocket she is assembling. She has trained a group of loyal ferrets to pilot the craft. Believe me when I say no animals were harmed in any of the testing.

Her Secret Lab: Once a family owned zoological park, this little habitat gained a brief bit of fame when it was featured in the indie film, “The Bank Foreclosed on Our Zoo.” The Ferret Lady was able to pick this property up easily with her bingo winnings and has plenty of room for all her furry friends.

Hirohito Robateau was born in a small rural village in Japan and always dreamed of becoming a great roboticist. He built his first robot at age 4, was accepted into college at age 12 and graduated with his Masters Degree at age 16. When his parents died in a mysterious all-you-can-eat buffet accident, on a Caribbean Cruise, he was forced to live with his aunt and uncle, his only living relatives. Young Hiro's aunt and uncle took him in and he was forced to move to Paris where his new guardians lived. His aunt was a famous clothing designer and his uncle an owner of several high-end boutiques. Mr. Robateau was introduced to the world of fashion and soon found that his love of robots was nearly matched by his love of designing clothing. He started combining his two great loves by producing a line of clothes for robotic models. The robots were not well received and he soon became the laughing stock of the fashion world. Enraged by the fact that nobody could understand his vision, he decided that humanity was unworthy of their place on the planet.


His Doomsday Device: He is currently building a digging machine that will be piloted by a robot crew. The machine will set an explosive charge near the Earths core to causing all of the volcanoes of the world to erupt. His heat resistant robots will survive just fine, the frail humans however...

His Secret Lab: His uncle's last boutiques is now his secret lab and is known as the Robotique. It offers high end fashions and the entire staff is made up of robots. He also sells robots as accessories, though what no one knows is that they are all secretly under his control.